How much were the conditions at the conditions at the front discussed at home? In the postwar discourse of disenchantment; in the great outpouring of literary books by Sassoon, Blunden, Graves and a host of others in the late 1920s and early 1930s, the 'mud, blood and rats as big as cats' was laid on with a trowel. But just how much did the average Tommy talk about his experiences, even with loved ones? And how much was left unsaid, in an attempt, perhaps, to protect families from the most difficult aspects, but also to avoid thinking about what was left behind.  This amounts to a Silence. With leave granted only rarely - perhaps just once a year for the average Tommy – it is not surprising that gaining a 'Blighty wound' was a hoped for occurrence. 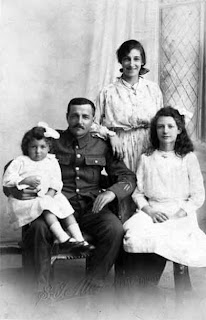 Photographs like this one, of an anonymous happy wartime family, are also silent. With the standing wife smiling for the camera, the two daughters are more pensive. The proud father, wearing his best service dress uniform is relaxed (his legs without the constraining puttees of the frontline). But his left arm tells a tale that is otherwise lost; that he was wounded twice (the two vertical 'wounding' stripes), and that he has a record of at least two-year's good conduct to his credit. How and where he gained his wounds, under what conditions the stretcher bearers struggled back with their human load, and what terrors he might have seen in the chain of hospitals are all untold. Hopefully, this photograph illustrates the end of the long journey of this soldier; but it tells all about 'The Silence'.

Peter Doyle's book about life in wartime Britain will be published next year, by Shire. Further details can be obtained here
Posted by Peter Doyle at 10:37

Peter Doyle
London, United Kingdom
Peter Doyle is a geologist with a life-long interest in military history. Author of several books on his professional subject he also writes on the role that terrain has had to play in two centuries of warfare. His interests extend beyond the scientific, though; he has written extensively on the British experience of warfare in the two world wars - illustrated with artefacts of those wars. He believes that objects have a tale to tell; he has tried to translate that for a wider public.